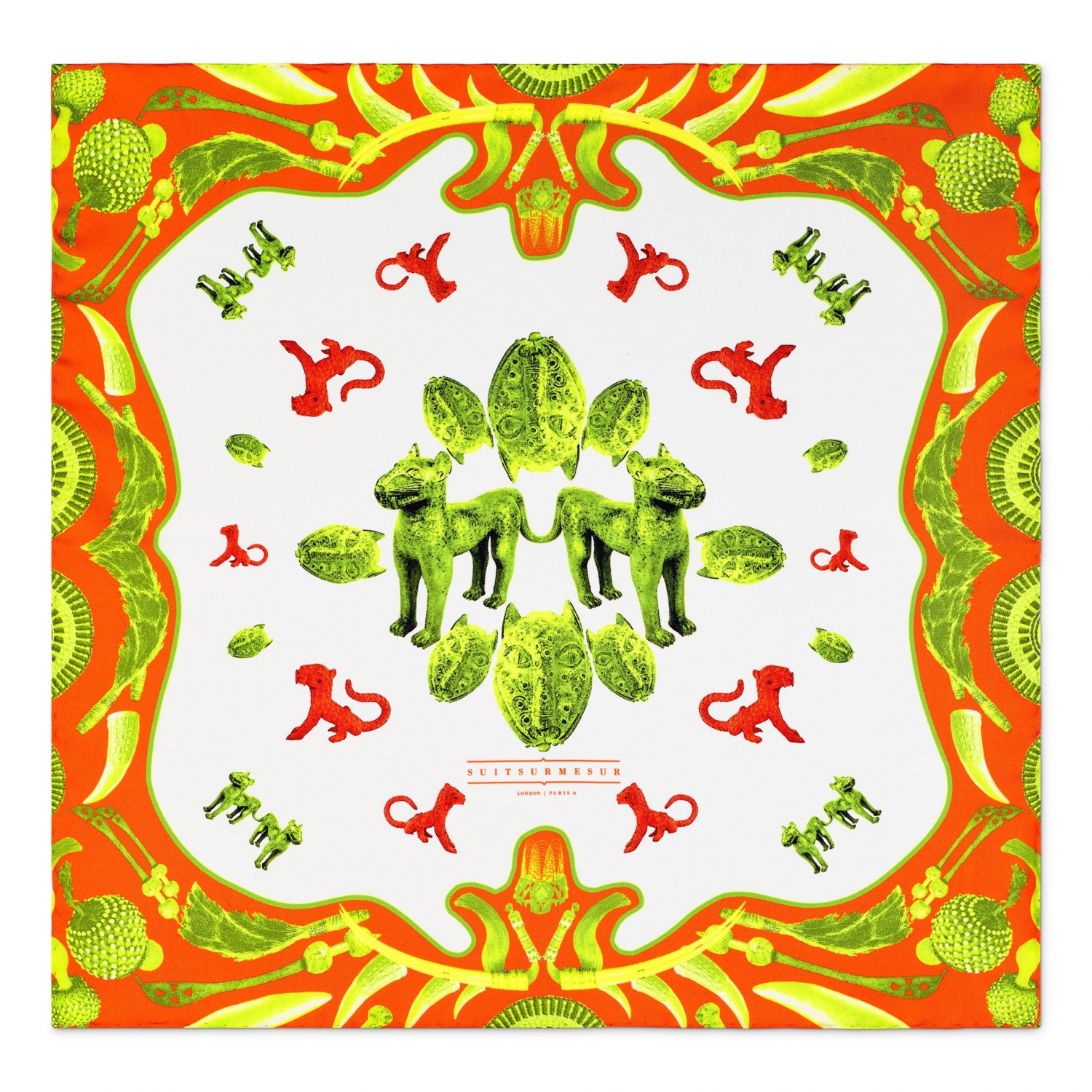 Instructions for returning off the shelf goods

Any irregularities and variations in the weave of the fabric i.e. foulards, pocket squares, scarves, ties are in no way to be considered as defects. They are a characteristic of the natural fibre.

Please make sure to read & agree to the return policy before committing to purchase.

The range represents a reflection of the timeless grandeur of the African continent of old. A contemporary celebration of Mother Africa, her culture, heritage, arts, ingenuity and endless riches of expression.

Printed exclusively for Suitsurmesur in the historical heart of British silk industry, Macclesfield. The Benin Leopards Pocket Square combines our love for African culture and art with our passion for custom classic menswear. Meticulously hand selected historical prints chosen for their beauty as art as well as for their compatibility as an accessory. We pay attention to how the pocket square can be worn; depending on the fold, different looks are possible showing only certain colours, making it very versatile pocket square. This pocket square is available in a variety of vibrant colours.

A celebration of the finery of some of the most intriguing artefacts in the History of Art, speaks to the ingenuity and creativity of the Benin artisans, who made these beautiful and decorative water vessels known as Aquamaniles, to serve the Oba and the dignitaries of old Benin.

The piece embodies the idea of the taming of nature and the elementals been brought under control. Symbolised by water been used in service through the powerful and agile form of the leopard. The genius and craft of old Benin knows no bounds.

This is an antique African Benin Kingdom tribal bronze / brass leopard which comes From Nigeria, Africa.

The Benin Kingdom was strong throughout the 15th and 16th Centuries and was located in West Africa bordering what is now Nigeria and Togo. Benin Clans were ruled by a King that was known as the Oba and who was the divine ruler of the Benin people. The people of Benin are called Bini and descended from the Ife people. The making of these Benin bronzes were strictly considered court art and were made exclusively for the palace of the Oba and were designed to venerate the achievements and memories of the Obas and their Queens also called Iyobas or Queen Mothers who ruled throughout the time of the kingdom. The metal smiths were very talented and used complex wax casting techniques, which were far ahead of their time. Their work in bronze, copper and iron was extremely refined and their methods of metal smelting, forging and lost wax methods exceeded any seen in Europe until the 19th century. Lost-wax casting sometimes called by the French name of cire perdue (from the Latin cera perduta) is the process by which a brass or bronze sculpture is cast from an artist's carving usually made from wax. Very intricate works can be achieved with this method, depending on the carver's skills.